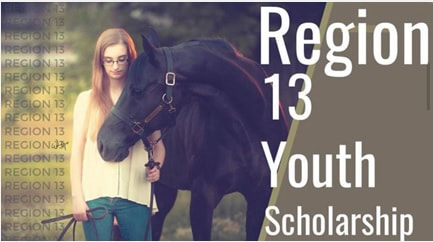 Up to two $1500 scholarships may be awarded to the top two applicants from Region 13.   All scholarship forms, photocopies, and letter of reference must be mailed in the same envelope to Chairperson and POSTMARKED ON OR BEFORE April 30th.  Applications and letters postmarked after that date WILL NOT BE ELIGIBLE FOR CONSIDERATION.

Criteria:
● Involvement in Equine Activities
● Leadership
● Sense of direction in furthering education
● Completion of essay
● Academic achievement and GPA.
Eligibility:
●  Applicants must be planning or currently majoring in any profession that requires college or other training equivalent.
●  Applicants must be high school seniors or freshman at an accredited college, university, or vocational/technical school.
●  Applicants must have been a resident of Region 13 within previous two years and be a current member of AHA through a Region 13 affiliate club.

​
Youth of the Year

AHA youth members are anything but average, and we know it! In fact, AHA offers the Youth of the Year award, which honors one outstanding youth member annually. The Youth of the Year is selected for his or her achievements and contributions to the Arabian horse industry, AHA, and his or her community. In addition to previous achievements, the successful Youth of the Year candidate will show dedication to the Arabian breed and a desire to remain involved in the industry, serving as an ambassador and role model within the Arabian horse community. The winner is featured on the cover of Modern Arabian Horse magazine, honored on the youth website, recognized at Youth Nationals, and receives a $1,000 scholarship.
All applications are due September 1 of the given year. Please see the current AHA Handbook for complete rules.


AHA would like to invite 4-H, FFA, AHA and Collegiate Judging Teams to participate in the 46th annual Arabian Horse Judging Contest.
This prestigious contest is held every year in conjunction with the famous U.S. National Arabian and Half-Arabian Championship Horse Show, which allows contestants the opportunity to judge national-caliber halter and performance horses. Ours is the only national contest for the versatile Arabian breed, and one of the few contests to regularly feature classes such as English Pleasure, Native Costume, Show Hack, and Country English Pleasure.
Each year, winners divide over $10,000 in generously donated scholarships and prizes. We are pleased to award the high individual in each division with a saddle, generously sponsored each year by Helen Nymeyer of Neymeyer's at Tanglewood. The high individual overall of the entire contest receives a certificate to the Arabian Horse Judges School and the opportunity to judge a championship class in center ring at the U.S. National Show.

The Arabian Horse Foundation, AHF, is thrilled to announce the continuation of the scholarship program at The Arabian Horse Association's Youth National Arabian & Half-Arabian Championship Horse Show. Scholarships will be awarded to the following:

The Hollywood Toi Foundation is proudly sponsoring a $2,000 scholarship to the Champion of the Half-Arabian/Anglo-Arabian Saddle Seat Equitation 14-18 class.

The primary goals of the USEF Youth Sportsman’s Award are to identify potential future leaders in the equine industry from all breeds and disciplines, and to recognize youth for their achievements.
Applicants must be age 17 or under as of December 1 of the competition year, and active members in good standing with USEF and their Recognized Association or International Discipline Association. They should demonstrate an ongoing commitment and dedication to the promotion of equestrian sport, serve as a positive role model for peers, be involved in community activities, and exhibit characteristics that exemplify positive sportsmanship principles. Participate at any level of competition, including local, regional or national events.
The overall winner of the USEF Youth Sportsman’s Award will receive a commemorative trophy, a $1,000 grant payable to the educational program of choice and a USEF Life Membership (valued at $2,500). The winner will also be one of the nominees for the USEF Junior Equestrian of the Year Award. The reserve winner will receive a $500 grant payable to the educational program of choice.